I like old sci-fi pulp art so I thought it would be fun to do this painting. After I finished it, several people asked which one was the goon. Originally, the blue guy was the goon but now I'm not so sure. Maybe he's actually the hero, and the one with the gun is a big fat jerk. 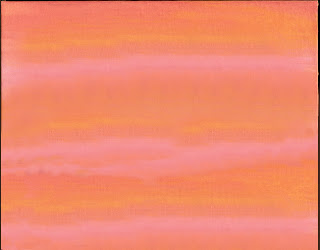 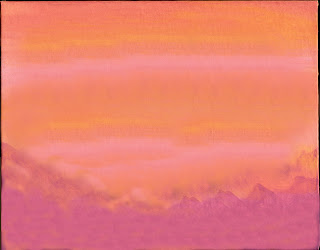 2. Background mountains were brushed in with an extremely thinned down PINKISH-PURPLE. I used the same pink as I used in the sky to pinkify the purple. 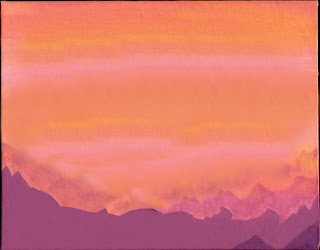 3. Middle-ground mountains were painted in with a less-thinned Pinkish-purple. Depending on how many layers of moutains desired, as the layers become closer they become darker and less transparent. 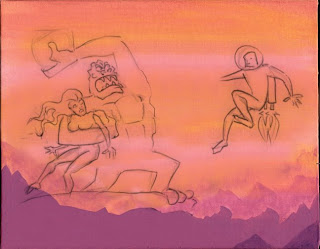 4. At this point I was satisfied with the background, so I sketched in the main figures. 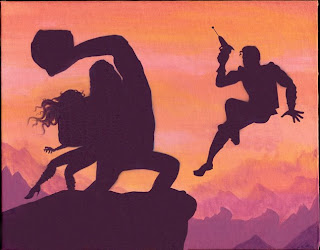 5. I wanted the figures to stand out against the colors of the background, so with a DARK PURPLE, silhouettes of all the foreground objects were painted. My goal was for all connecting objects, regardless of their base colors, to blend together into the same Dark Purple. It's easiest for me to achieve this if I lay down the shadows first.
When I painted the girl's blowing hair, I thinned the Dark Purple down a bit to reveal the Orange background through it at the tips. 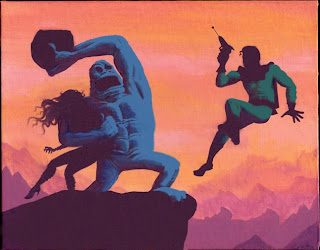 6. Then the base colors were started. On the goon I took BLUE and hit all the high spots on the right side, letting the paint fade away to reveal the Dark Purple as it wrapped around to the left (shadow) side. I did the same for the guy's suit, but used GREEN paint instead. I chose Blue because it contrasts most with the Orange background. I thought since the shadows were Purple and that was a pretty prominent part of the color scheme, I needed to use Green to balance out the spokes of the color wheel. This forms a sort of color wheel trident with three prongs and a handle. 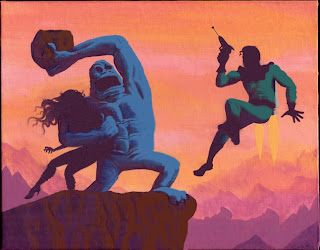 7. I used BURNT UMBER on the mountain and the rock in the goon's hand, in the same manner as I did for the Blue and the Green in the previous step. Burnt Umber is a brown color, which is a neutral, so even though it covered a fairly large area of this composition, I didn't think it would disturb my color scheme.
I painted the jetpack GRAY on the right side.
Also I painted an ORANGE blast coming from the jetpack. 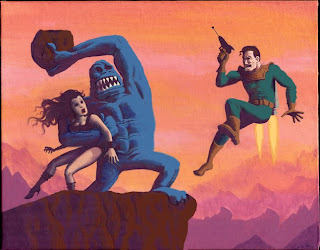 8. The same way I painted the Blue and Green and Burnt Umber in the previous steps, I painted FLESH on the girl and the guy. I hardly added anything at all to the girl's right leg, since it was mostly in shadow.
I used a TAN mixed with a little BURNT UMBER to paint the guy's boots, gloves, belt and shoulder plates.
For the goon's teeth, I used OFF-WHITE. As the teeth wrapped around to the left, I thinned the paint with water to reveal the Dark Purple shadow color through the Off-White.
I painted YELLOW inside the Orange jetpack blast, to make it appear brightest in the center. 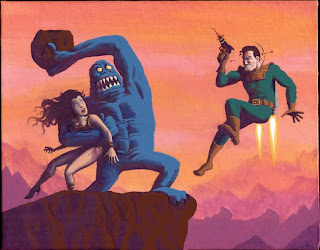 9. All the little details were added in this step: GOLD bands on the girl's suit, BRASS buttons and buckle on the guy, RED and YELLOW lines and dots on his gun, and everyone's eyes. A cast hand shadow was added to the girl's leg with thinned Dark Purple.
Inside the Yellow of the jetpack blast, I painted WHITE at the very center to show the most extreme brightness possible. I played all my cards here, and now I can't go any brighter than this. I can not use White on anything else in the painting, or the blast will look less powerful. 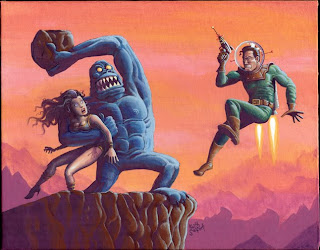 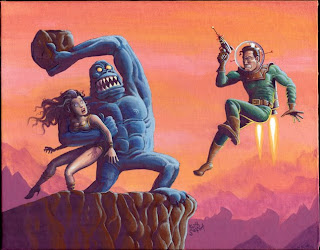 11. Lastly, an ORANGE-YELLOW glow was added to any object in the jetpack blast's visible range. For the most part, that would be the guy's back. The Orange-Yellow mix was made from the same color I used on the blast itself.
Posted by KW at 6:44 PM 3 comments