Okay, trying it again. The 1st version of this comic was unclear. I hope this one makes sense. If not I'll throw it on the scrap heap. That heap is getting out of control these days. Sorry trees, for all the paper I wasted. 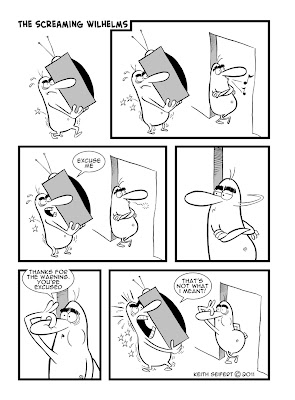 If you want to see some more Screaming Wilhelms comics click HERE.
And HERE for one more.
Posted by KW at 1:11 PM 8 comments

Number six in a long run of six comics (so far) about the Screaming Wilhelms. See their earlier comics by clicking HERE. 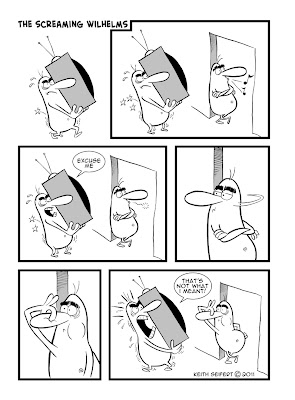 Oh powerful and mighty flatulence joke, is there nothing you can't make greater?
UPDATE: This junky old version of the comic has been superseded by a NEWER FANCIER VERSION. CLICK!
Posted by KW at 10:44 PM 7 comments

This is Franklin Pangborn. He was famous performer from back in the day. I've never heard of him until now. This photo is very disturbing to me. It's difficult to explain why it creeps me out so badly. I'm wondering if it's because the guy is all gussied like a corpse in a coffin.
If I stare at the eyes long enough they look like they twitch. At the small size it doesn't bother me as bad. Click and enlarge the image for the real horror. Stare at it for at least 30 seconds. Does it seem creepy to anyone else? 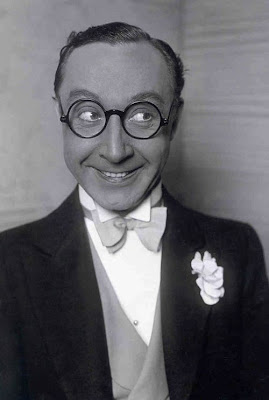 This reminds me of something that happened to me as a child. My mom brought me to a funeral home to visit an old lady who had just became a widow. We walked right up to the coffin and stood there next to the dead guy. As my mom talked to the widow, I stared intently at the dead guy. If you stare at something long enough it seem to move. Of course it was all in my head but for the life of me I honestly thought it was really breathing. I swear and cross my heart I saw what looked like the dead guy taking a deep breath. I screamed out, "He's breathing!!" and my mom slapped me down and told me to be quiet.
As I stared more intently at the chest and stomach of the dead body, it looked like it would periodically do it again and again. I thought the dead guy was trying to trick us and I was the only one who knew his secret. I figured my mom didn't hear what I said the first time because she didn't get upset about the trickery, so I yelled it again.

When I said it louder the widow became excited and looked into the coffin at the body. I got promptly smacked and told to shut up by my mother. This was extremely frustrating. I felt like no one was doing anything about this deceit! Why was this faker trying to trick his wife into thinking he was dead? I figured everyone would be happy about my discovery, but they weren't. I got lots of glares and stares. I remember thinking, "What is wrong with these people?! Do they not want him to be alive?"
Posted by KW at 7:32 PM 7 comments

Sometimes it's difficult to decide which spot would be the best placement for ears. In those cases I like to use ALL the spots. Then no one will ever be able to say, "Hey! You don't understand human anatomy!" 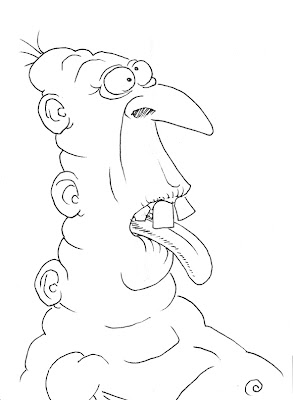 I haven't drawn anything in a few days. Sometimes just a plain ol' ugly face satisfies the itch. 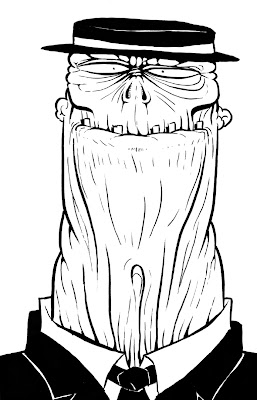 These are pretty nifty. They're called Freaky Geeks and you can get this full set for a 3 or 4 bucks right now on Ebay. They're about 1 inch tall so they meet my fit-unnoticeably-into-a-drawer requirement.

This is just the kind of thing to get me into a drawing mood. They all have names but I don't know them. I could google them to find out their names, but the google tab is ALLLLLLL the way over there on the other side of the screen, so forget that!

You can probably attain an entire set the old fashioned way, from a real gumball machine, but I bet you'd spend tens of dollars before getting the last one needed to complete a set.
Posted by KW at 5:57 PM 11 comments

I just got a new toy. This is a Fuzz Face pedal for guitar, bass, keyboard and whatever else you can think to run through it. I like this thing a lot. It's pressure sensitive too. The stronger you strum a note, the more the fuzz is activated, so you have a lot of control over the sound of your sound. I wonder if it's a coincidence it's called Fuzz Face and it looks like a smiling face. 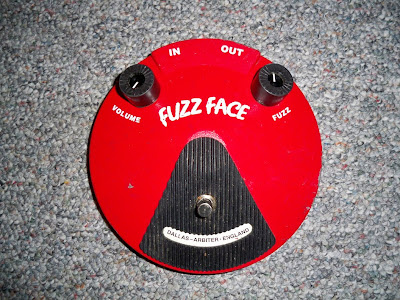 There are distortion pedals, overdrive pedals and fuzz pedals. A fuzz pedal has a sloppy sputter sound whereas the overdrives are more warm and solid, and distortions are cutting and sharp. Youtube explains it a lot better than I can.

I FOUND SOME FINGER PUPPETS

At the Hot Topic store in the mall they're selling weird little monster finger puppets. I found two different sets.

There's a zombie set, and a set of strange guys I can't quite figure out. They aren't exactly monsters but they aren't people either. Both sets oddly have six characters each, which is like selling a set of three shoes. 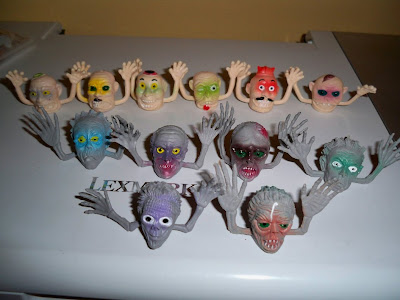 I really like finding little goofy things like this. They put me in the mood to doodle. Lately my home is getting pretty full of junk so I'm not able to get large items anymore. These things are so tiny they blend fairly unnoticeably into a drawer. Also since they aren't famous character products they're really cheap.
Posted by KW at 7:59 PM 10 comments