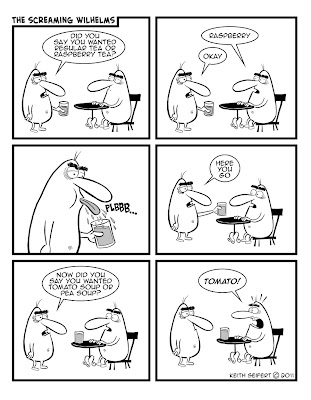 The above comic is an expanded version of this old notebook comic: 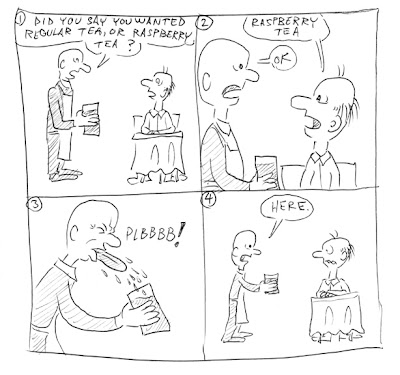 For my day-job I work at Karges Furniture. I've been there since 1990, first as a wood carver, and then moved into the engineering department. Recently I was allowed to design my first piece of furniture. I've always liked Carlton House desks so that's what I chose as my first project. What I like about Carlton House style desks are the walls of tiny doors and drawers curling around the guys who sit at them. It feels very private and personal, and nice if you need to concentrate. 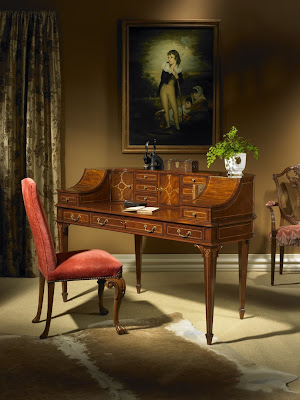 Now that more and more people are using laptop computers, I suspect old-fashioned desks like these will make a comeback. People don't really need giant computer desks with printer, scanner and tower cavities anymore. Now with Wi-Fi the printer can be put anywhere, even in another room. 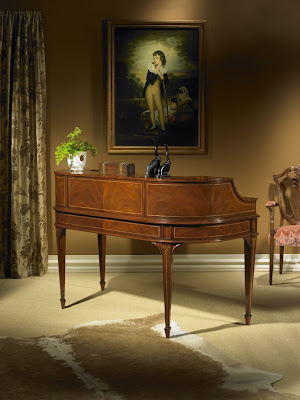 This desk uses mahogany solids, with mahogany and prima vera veneers. The white inlay lines are holly tree wood. Before applying stain to this desk, all the holly inlay lines had to be covered with a frisket, which is sort of like liquid latex rubber. This prevented the stain from darkening those places. After the stain had cured the frisket could then be removed by simply rubbing it off with fingers. The frisket-appliers cussed me real good for all those skinny lines. 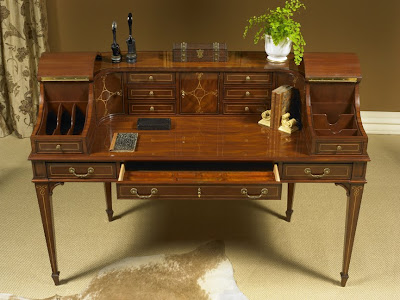 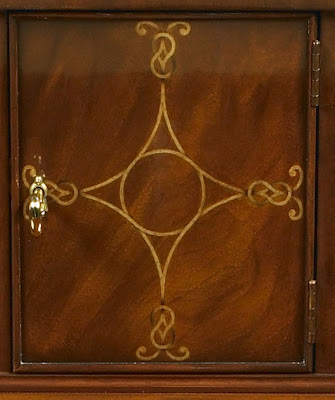 Above is a closeup of the inlay work. To make the shading on the white strips of holly, the tips of each piece were placed in hot sand until they were burned dark enough.
I'd love to own one of these desks since it was made to possess all the elements I personally love, but I'm gonna have to save a while to be able to afford one. They cost as much as a car.
Posted by KW at 7:47 PM 17 comments

New-ish. It's used, but new for me... sort of. It's called the Ibanez Tube Screamer TS9. I had one of these guitar pedals about 20-something years ago. I left it at a buddy's house and as time went by it became more and more awkward to ask for it back. To make a long boring story a short boring story: I never saw it again.

Ever since I lost it I haven't been able to get a sound I liked on any other pedal, and I've gone through a bunch. For the longest time I couldn't get another one of these because they were discontinued and the price zoomed up on Ebay. Now they're easily accessible again. This pedal records very well. It sounds good no matter what type of music you play on it. I think opera backing music would even sound good on this pedal. Maybe even country! he he! Just teasing. 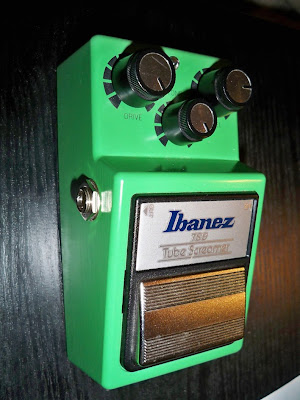 Before you get mad about the country music - gaze into the eye of the wiener dog... Your anger shall dissipate. 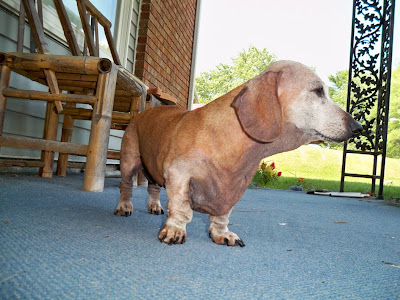 I've decided to start helping students who are having trouble with writing assignments. I know how it is sitting up that night before a paper is due, racking your brain trying to think of something you can write about. Kids, I'm happy to say there will be no more need for that. I am going to allow anyone to plagiarize this story as their own.
Get your pencils out, here it is:

A while back I had a dream about a green-colored man with a long heavy head. So heavy in fact, he could not stand upright. He stood in a stooped position and looked at me. I remember noticing his shadow; it seemed very important at the time. After I woke up I couldn't remember why the shadow was so important. His head looked like some kind of vegetable with asparagus points on the top. To the best of my ability I drew what I saw in my dream. SEE DIAGRAM BELOW (Write it in all caps like that so the teacher thinks it's important.)

He stood motionless almost like a vegetable yet he did very subtly, almost unnoticeably, turn his head when I walked to a different place so I was never out of his line of sight. I was afraid to look away because I didn't know what he was capable of. I wondered if he'd attack if given the chance.
A football is not a very good gift. (Good finisher-upper.) 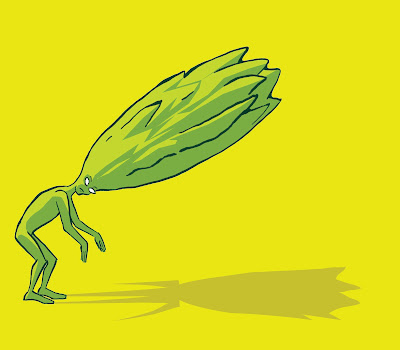 Well, that's it. Use it freely and enjoy your easy A! I don't allow you to copy the drawing though. Not because I value it, but because the teacher should see something created by your own hand. That will make it more authentic. If anyone does draw their own version of this guy I'd love to see it. Email me some pics or links!
Posted by KW at 2:40 PM 12 comments

WHAT IS THIS FRANKENSTEIN TOY?

I need help. Does anyone know the name of this toy, or where it came from? He's just under 2" tall. My friend gave it to me and he couldn't remember the name, but he said it was a part of a set of figures. 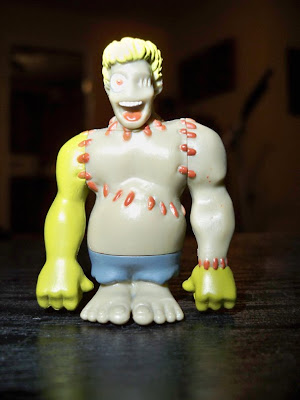 He said it was designed to pull apart so you could mix and match heads and limbs. 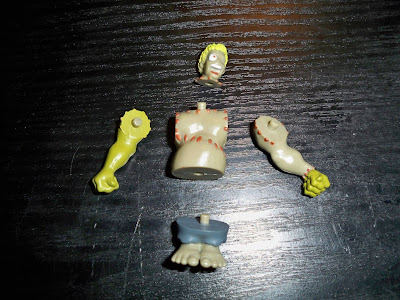 The back of the toy says:

I googled that and came up with nothing. I really like this weird little guy, so I'm curious what the other monsters looked like.
Posted by KW at 7:55 PM 11 comments

This was so weird I had to get it. We went to Chicago Chinatown and I saw this in a gift shop. It's a precious little ceramic box with a sweet little brass bow tie latch on it, and it just happens to glorify a horrible scoundrel. Right on! 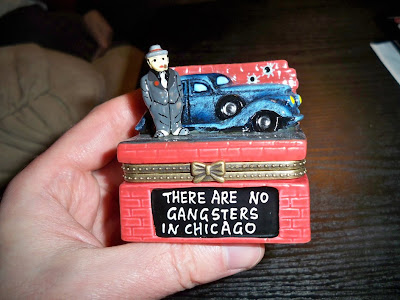 Here's the right side. See the little bullet holes? Cute, huh? I know it! 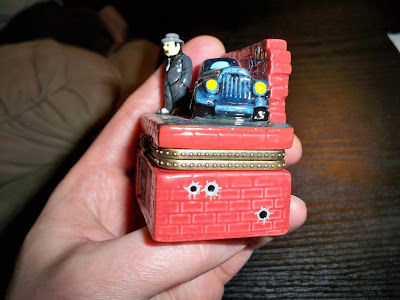 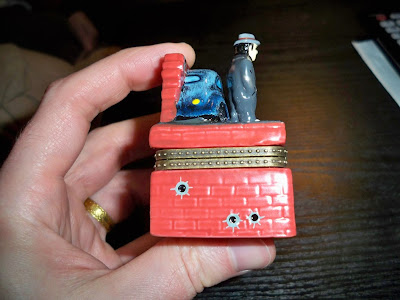 The back has a beautiful signature in the handwriting style of the man himself, fired permanently into the ceramic. It's the little details that make it so special. It's a keepsake to be treasured and passed on through the generations. 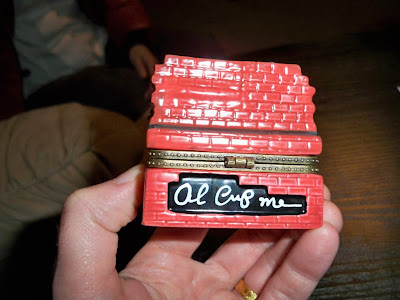 My Grandma used to live in Chicago back in the 1920s and 30s with her dad, mom, and a bunch of siblings. She always had lots of stories about the good ol' days. I remember one gangster-related story she told me.
One time her entire family was in the car waiting at a red light, and another car pulled up beside. She said there were some men in the other car and they all had guns. According to her they were holding Thompson machine guns. These men intently studied each face in my Grandma's car, one at a time. When they'd seen every face and decided these weren't the people they were looking for, the men drove on down the street and were gone.
I remember being just old enough to do the math in my head. "Hmm... If they'd have killed Grandma then my mom wouldn't have been born! Then who'd take care of me?! Where would I live?!"
Posted by KW at 10:21 PM 8 comments

HAIR IN THE EYE OF THE BEHOLDER

This is an old comic I don't think I ever posted on this blog.
Posted by KW at 7:10 PM 9 comments

DOODLES FROM THE TRASH HEAP

These are Post-It note doodles. Sorry in advance. 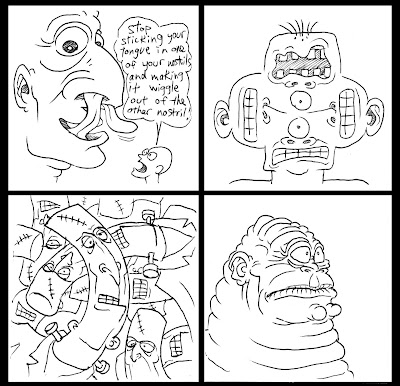 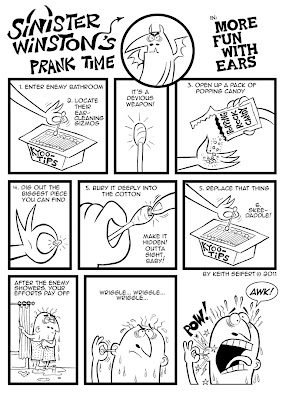