MAKE A LASER PISTOL OUT OF A JUICE BOTTLE

How do you work this blogger? I fergit! Although the real reason I haven't posted anything in a while is because of laziness I'm tempted to use "getting a new house" as an excuse. We did get a new house and it left me computerless for a while, but not for five months.

I made a movie prop laser pistol for my yet-to-be-realized movie. I've been planning out a movie now for many years. I've got story ideas but not a complete story, and I have lots of props and friends who are willing to act.

This laser pistol started as a pomegranate juice bottle. Actually 3 juice bottles. Walmart sells 4 different sizes. I epoxied 3 together to make a gradually tapering shape. The logos were removed with acetone and elbow grease. 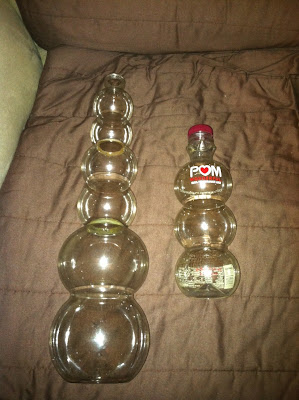 Step 2: Make the entire gun! Sorry about the lack of pictures up to this point. I didn't think to snap photos until I was pretty far along. The hand grip was carved out of wood. The round part above the hand grip is a plastic wine glass with the stem removed. It was $1 at Target. The long barrel is a candy tube. The clear trigger/body contraption is made from a post-surgery breathing machine. 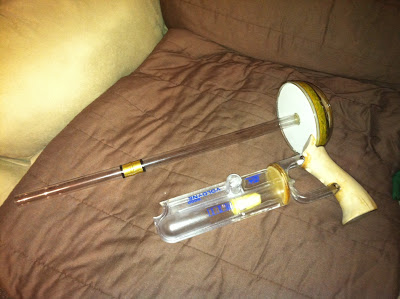 Here's a view of the back side. I cut part of the wine glass off so I could put batteries in the hole. There's a wooden plug for screwing over the hole. I will glue that cone-shaped clear piece to the back of the wood plug to disguise the flat back of it. 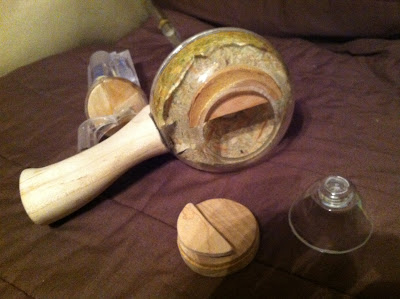 This laser pistol lights up. Here's a string of green LEDs and a battery pack ready to slide into the long tube you saw a few pictures above. 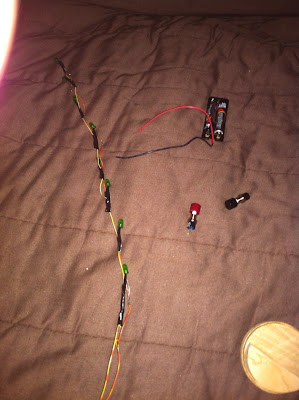 Here's another smaller cheap plastic wine glass. I pulled the base off to use it as a disk for the front "laser-emitting" end of the barrel. 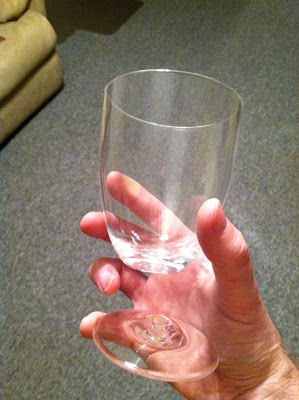 I pulled this off of a Halloween toy. It lights up and blinks and changes colors. It'll go inside that front disk. 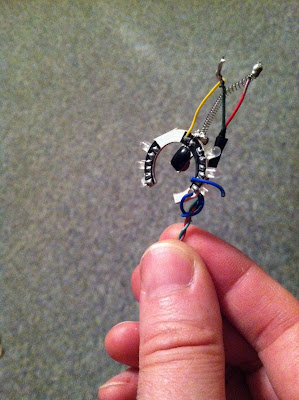 This gun will have 2 triggers. One will activate the blinking piece in the photo above, and the other will activate the long strip of green lights. These triggers are on/off buttons from Radio Shack. I epoxied them into holes drilled into the hand grip. The holes meet another hole which travels up into the top compartment.  That's how the lights will attach to the batteries. 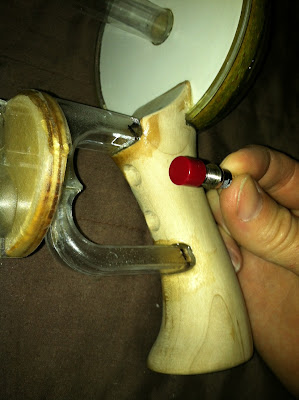 Here's another one of those breathing machines. If you've ever had to use one then you hate them, and are most likely happy to see one cut up and turned into something else. 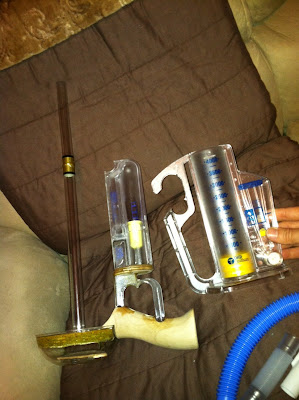 The breathing machines also come with a flexible breathing hose. I will use that too. 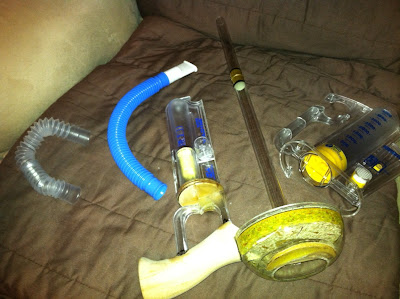 The juice bottles slide down over the tube like this. I should have mentioned earlier a hole was made in the bottom of each juice bottle before epoxying them all together. The holes are just big enough for the tube. 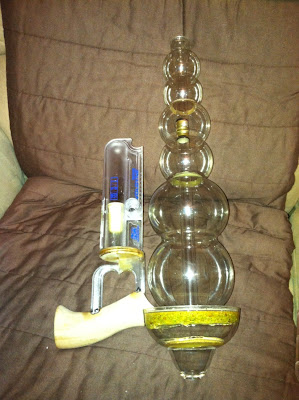 These little wooden things on the sides are wheels and axles and spools you can buy at a hobby store. I got them at Hobby Lobby. They have lots of various shapes. I don't know what I'll do with them all but bought a bunch of different ones. I don't know what the purpose would be for these things but they seem like they'd be absolutely necessary. 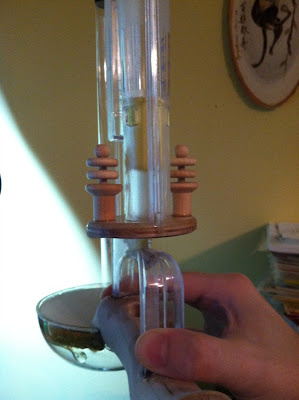 This paint "makes any surface look like hammered copper." It did a pretty good job. The entire body was sprayed, but not the juice bottles. 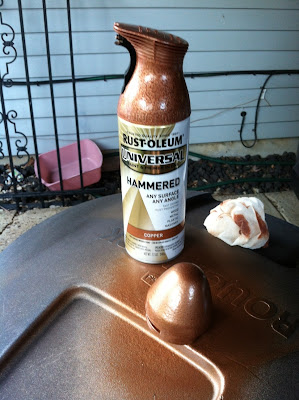 After the paint dried I applied Minwax dark walnut stain, and then wiped off the high spots so it would look darker in the crevasses. I cut some fake black leather from scrap at work to make a gripper for the palm-side of the hand piece, and attached that with contact cement. 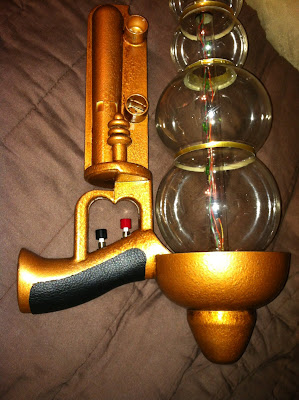 It glows green when the red button is pushed. Intuitive, eh? 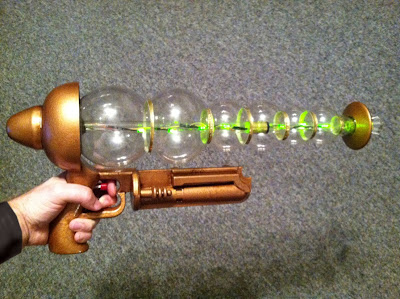 For some reason there's a box of old broken radios in the garage. I cut a couple little squares from the circuit boards and glued them to the sides of the gun. I wanted it to look more deadly. Does it help? I don't know. 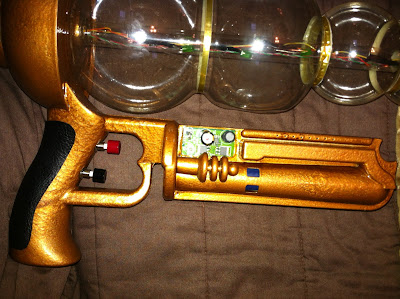 The last thing I did was put a big wad of leftover colored wires inside that clear flexible hose and glue it to the side of the gun. You can't tell very well from this picture but the wires show through the tube, and make it look as if something really technical must be going on inside there. 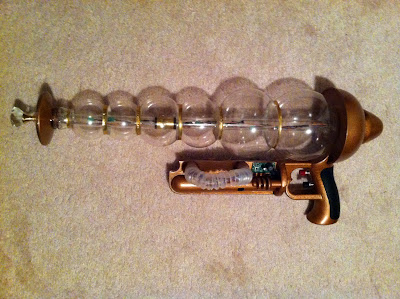 It was glossed over in the pictures above but a "crystal jewel" ceiling fan pull was mounted to disk on the front of the barrel. The blinking, color-changing light is right under the crystal so it flickers when the black trigger button is pushed.

After completion I was saddened to learn no real lasers shot out of this gun. All this work for nothin!
Posted by KW at 11:35 PM