You may have seen these before. Sometimes they're called Mystery Balls. The fancier ones are carved from ivory, while the cheaper ones are wooden. I've been wanting one of these for a while, and I think I'll just have to keep wanting them. I'll never be able to afford one since they cost as much as a new car. 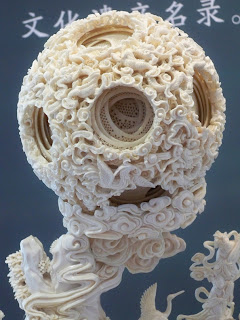 My brother-in-law has one with 28 or 30 levels in it. He let me try to solve the puzzle but I was too scared I'd break something if I handled it very much. To solve the puzzle you much align all the holes through all the layers. It's much more difficult than it seems. Usually you can get one hole lined up all the way through but the rest aren't even close. It's very much like a Rubik's cube; it's not too difficult to get one color but you can forget about it after that. 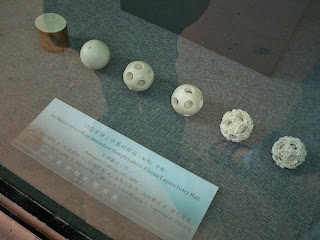 It's all carved from a single chunk of ivory. I have no idea how they can get in there to carve those inner layers. I would assume they'd have to carve the innermost layer first so they could hold it in place while working on it. If they worked on it from the outermost first everything would roll around and they'd never be able to grip anything to carve it. 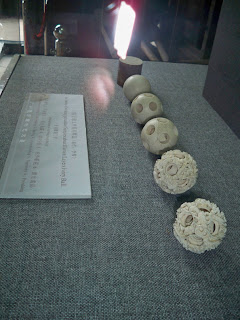 I think I heard someone say all the old guys in China who know how to make these are dying off, and it's becoming a lost art. I hope they train some new younger guys to take over.
Posted by KW at 8:37 AM