Here's a fairly old drawing I dug up. I remember having completed an epic saga for these guys too, but can't find it as of yet. There were big plans for them at the time but in the end they got pushed aside for other projects. I think the main reason I gave up on them was because they seemed too much like the X-Men as far as their story went. If I can find the story I'd sort of like to work on them again, and give their looks and X-Men-iness an update. 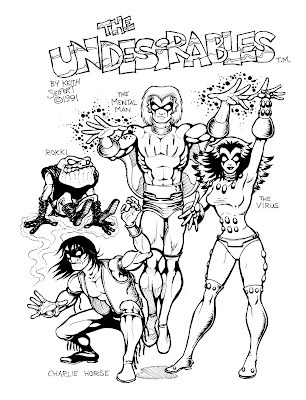 I remember bits and pieces of their story, and I remember all of their powers.

Mental Man has the power to make people think horrible things are wrong with their bodies, such as making them think their hands are cut off, or they have fresh bullet holes.
The Virus is a carrier of all the viruses in the world and has the power to emit them from her body. She basically makes people sick.

Charlie Horse (his nickname) has the power to give people excruciating muscle spasms of bone-breaking proportions by a mere touch to that spot on their bodies.
Rokki can eat anything including poisons. Nothing can contain him because he'll eat through it, whatever it is.
Since I get good responses when I include Lucy in a post, here she is unrelated to anything, just drinking water. I thought the water looked nifty in this stopped moment of motion. Maybe it is related. I can compare the waves in the bowl to the power waves which come from Mental Man's hands. They would be accompanied by a slow, low sound effect "WOOOBA... WOOOBA... WOOOBA..." 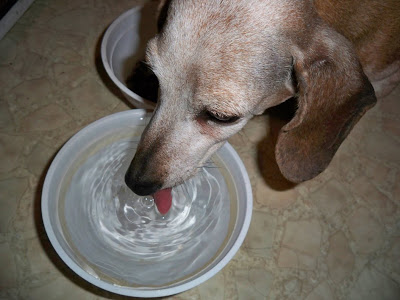