For a while I've had some guitar parts laying around. I'm finally getting around to making an electric guitar. I'll document the steps as much as I can. This is going to get done a little at a time. I'm still waiting on some hardware I bought from ebay. The prices were good but I suspect the wait is going to be painful. I ordered 6 tuning keys ($8 incuding shipping) and a tune-o-matic style bridge ($6 including shipping.) They're being shipped from the other side of the planet. 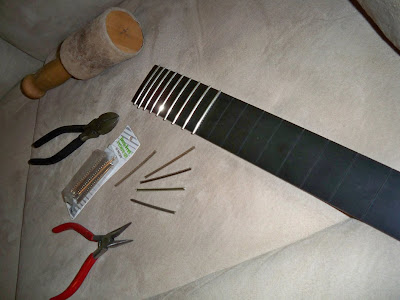 The 1st thing I'm working on is the fretboard. Each fret is roughly measured and cut a little bit long. 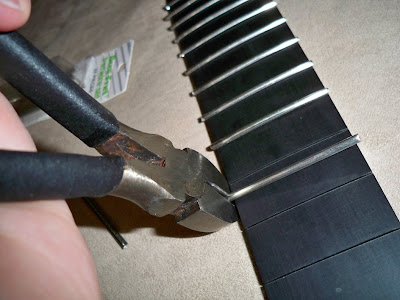 The fretboard I got was already slotted but I have to put my own frets in the slots. If you are thinking about making a guitar I recommend you find an already-fretted fretboard. This is the toughest part of the entire project.
There is a slight arch in the fretboard. I am pre-bending my frets to match the arch of the fretboard. If I don't then the frets tend to seesaw back and forth as I tap in each end, rather than seating themselves properly. These frets are very thick. If I used smaller frets I don't believe it would be as big of a problem. 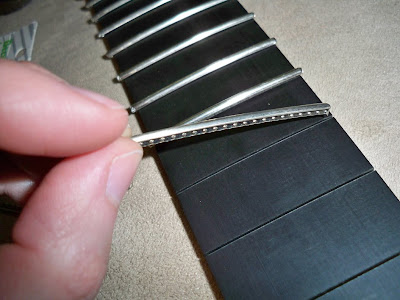 With a bandsaw I cut out an arch in a piece of wood to match the fretboard's arch. This is my tapping block. I drive each fret in the same way, by laying the block on the fret and driving it in with a mallet. 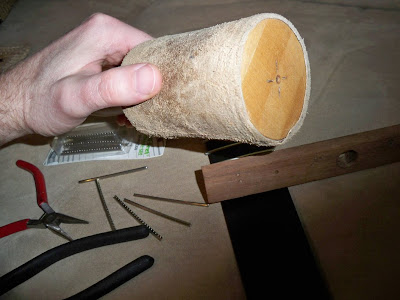 Each time I drive in a fret I check it closely and make sure it's driven in as tight as possible. A piece of paper should not be able to slide under it. If one fret is higher or lower than the rest it will cause the strings to buzz on undesired frets.
To fix that problem the frets must be filled level and then the newly flattened fret tops must be re-rounded, if that makes any sense. In other words, it's best to just get them right the first time. I went over them 3 or 4 times after I thought I was finished, and kept finding new spots when they could be driven in more. 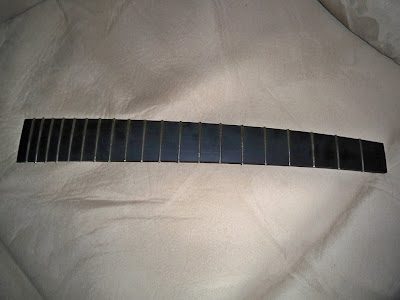 DAGNABIT! This was not expected. The frets were so fat they bowed the fretboard by wedging it a smidgen at a time over the length of the fretboard. I don't believe it's gonna be a problem because it flexes right back flat again with very little effort. Once it's glued down onto the neck it should be fine. 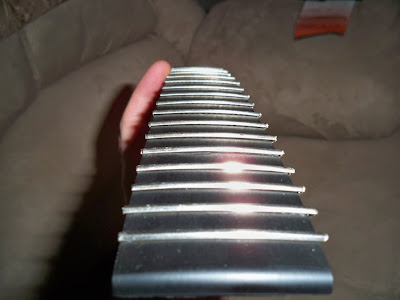