Today I'm glued the fretboard to the neck. I left a little flat spot at the top for the nut (about 1/4") and glued the fretboard down starting there. I centered the fretboard in the width of the neck. It's important the fretboard is centered pretty well or later the strings will gradually drift away from the thru-neck. That would be noticeable since the neck has the maple/walnut stripes in it. I'd hate to have to mount the bridge off-center too.
The fretboard is very hard ebony wood, and I don't know if it was necessary or not, but I worried the glue wouldn't absorb as much as in a regular piece of wood, so I scratched up the back of the fretboard with a knife. That hopefully gives the joint more tooth to grip. 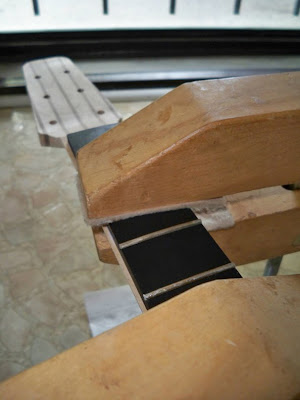 The more clamps the better. A few more would have been nice, but this should be fine. 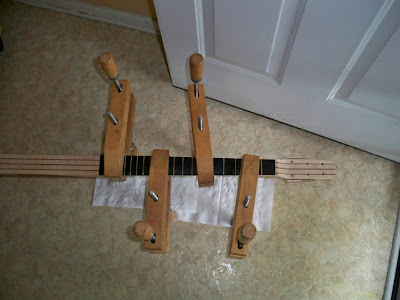 Those are paper towels under it to catch glue drips. Hopefully there aren't any though. I used a wet rag to wipe off any excess glue I could see. If you don't wipe off the glue it will fill the grain pores, and then those spots won't take stain later on. I don't know if I'll stain it or not, but I'm prepared either way now.
Posted by KW at 9:11 PM