This is how I made the nut for my guitar. If you aren't familiar with guitar jargon a "nut" is like a bridge, but it goes on the top end of the strings, up by the tuning keys.
I started with a 1/4" piece of Plexiglass(tm). I found this in the trash at work. It had cuts and breaks and scratches and holes in it but I only needed a few inches of good stuff so it was fine. 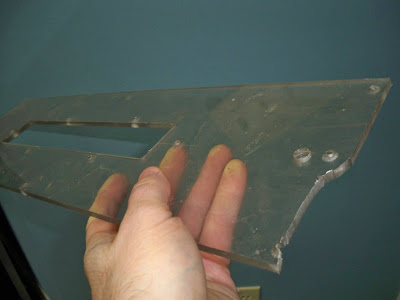 1st I cut out a manageable chunk slightly bigger than what I would need. 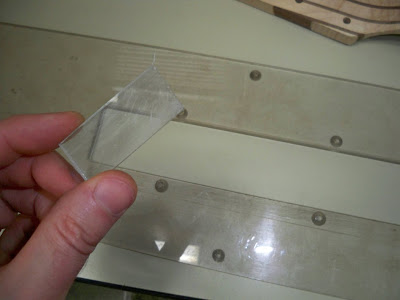 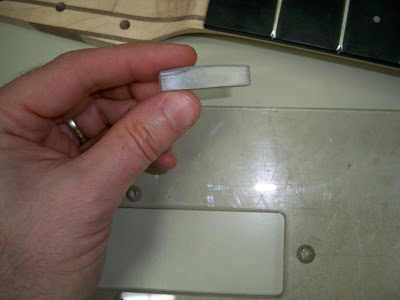 You can't see it very well from this picture, but there is a slight angle in the top surface of the nut. That will relieve the stress on the strings. The angle tilts down toward the direction of the tuning keys. 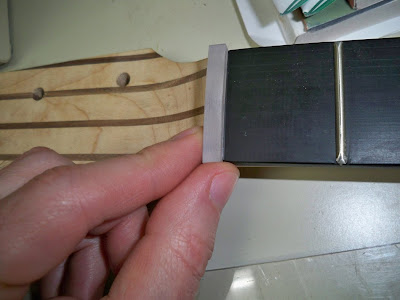 I used a very tiny file with a triangular cross-section to file 6 evenly-spaced grooves into the top of the nut. The 2 outermost grooves are only 1/8" away from the edge of the nut. The rest are spaced about 1/4" apart. 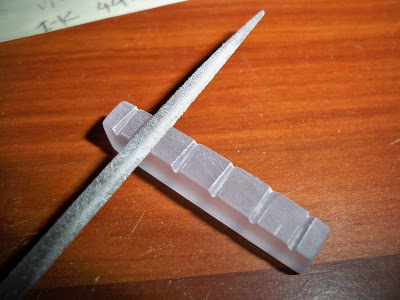 To hold the nut onto the neck I drilled 2 little holes in the bottom. I cut the heads off 2 brads and put them in those holes. 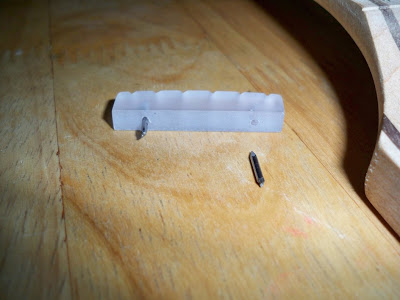 I made matching holes in the neck. You can see them if you look closely at this photo. These holes were pretty critical. If I didn't get them right the nut could be off-center, or not flat against the fretboard. If the nut was off-center the strings would hang off the fretboard on one side. If the nut wasn't tight against the fretboard the intonation would be wrong. I checked and double checked my marks before I drilled these 2 holes. Then I wiped the sweat, crossed my fingers, and tested the fit. I uncrossed my fingers before checking the fit because it was difficult to hold everything. 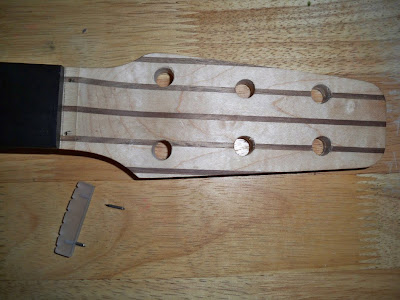 Tada! It pressed on snugly and seated flat into position. Shoo! That's one of the few extremely critical steps. I'm happy it turned out okay. Right now the string grooves are intentionally a bit high. After I get the strings on it I will do some deeper filing to get the string action just how I like it. 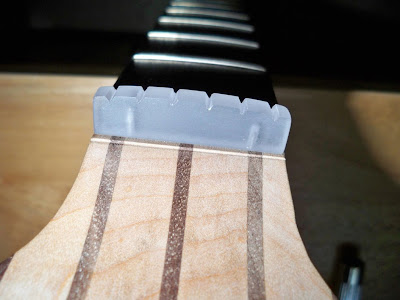 If you look at this photo you can see the holes for the brads are at a slight angle. This is to create a pinching effect so no epoxy is needed to hold the nut in place. When it's all assembled everything is tight. If I remove the nut, the brads will become loose and fall out. That makes it handy for future replacements or for fine tuning the string action. If all the strings are high I can sand the bottom of the nut rather than filing all 6 grooves.
I sanded all the surfaces of this nut so rather than clear it's frosted. In the past, depending on the rest of the hardware, I've colored the nut black. That can be done at any time so I'll see how things look later on, and decide then.
Posted by KW at 10:33 AM