Day 2 of my Cigar Box Guitar Project. It's not easy to find a chunk of wood 3 inches thick without paying big bucks, so I glued two thinner pieces together. This is better anyway when it comes to necks on musical instruments.
I can reverse the grain directions in the two pieces so if warping tries to occur, both halves will work and pull against each other and not let that happen. To reverse the grain direction, you just need to look at the end of the board, and whichever way the grain arches are cupped, orient the other piece in a mirrored direction. I suspect that makes no sense. If so ignore it. 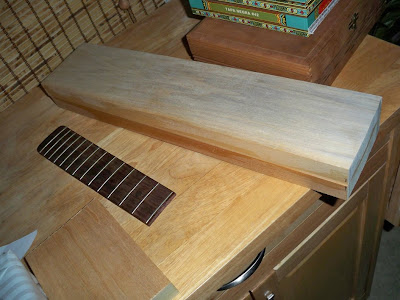 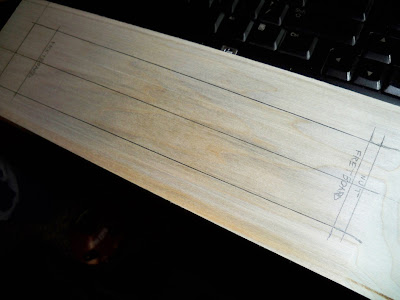 These strips of wood were selected because the grain arches were centered pretty well in the strips. If you look at the sawn section of the headstock you can see the grain arches. If the arches aren't centered then later on it may want to warp and twist in a weird direction. Now if it wants to warp it will pull the same on both edges, and then the opposite piece of wood will pull in the other direction. It has 2 choices: either stay where it's at forever, or explode. 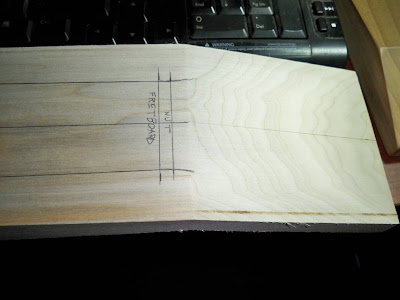 Here's the side view of the neck. Lucy was distrustful at first. 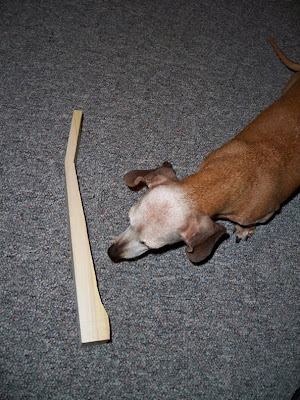 Later she relaxed and allowed it to coexist in her world. 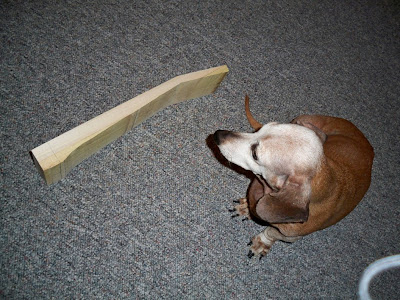 Next the top profile was cut out on the band saw. I left the headstock big since I hadn't yet decided on a pattern for that. 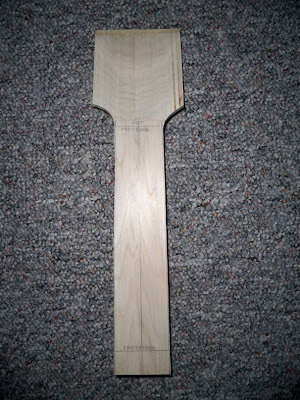 Rounding the back was done on an edge sander. It seems like a tricky job but really it's pretty quick and painless. The entire operation took 10 minutes or less. If I tried to do it with chisels I'd have spent a few hours trying to get it even. On the edge sander I can drag the length of it across the drum on the end of the sander. Then rotate it a bit and drag the length of it across again, and just keep repeating that until I've went around the entire back face. To do this you need some pretty coarse sand paper. 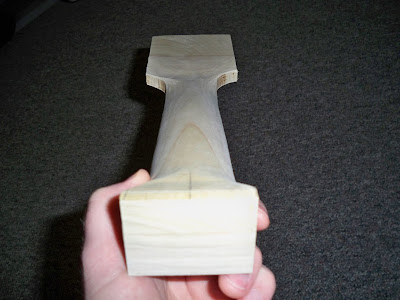 Lastly I drew out a headstock shape to fit my tuning keys and cut that out on the band saw. The pencil marks show me where to bore for the keys. Since I cut a 6-Tuning Key Strip in half (in the last episode) the keys can not be symmetrical. It doesn't bother me though, since it's a clunky cigar box guitar after all. It adds to the whimsicalness of it. 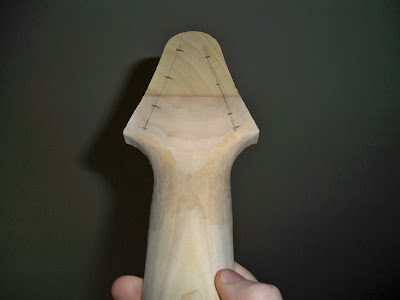 Next time on "Cigar Box Guitar: The Series," I'll cut those holes and stick that fretboard on that neck!
Posted by KW at 4:44 PM