Day 7 of my Cigar Box Guitar Project:
Before putting a finish on it, there are only a couple more things left to do.
First, a sharp ridge was carved across the center of the bridge, and 6 grooves were filed into it for the strings. 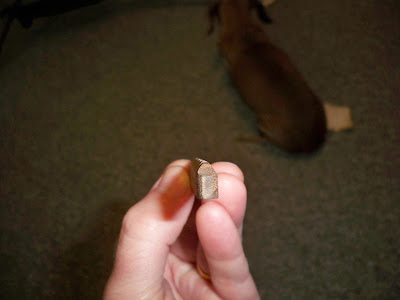 I attached the saddle with glue and dowels. The dowels are inside the groove so they won't show when the bridge is in place. I coved the edges of both the bridge and the tail piece because they looked really plain. 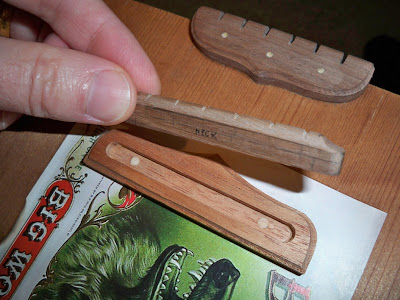 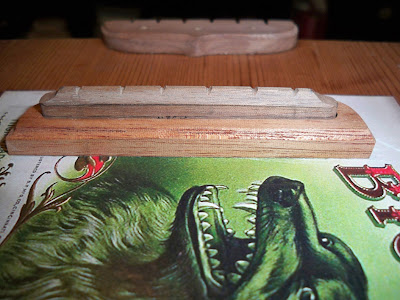 Instead of a big sound hole in the center of Big Wolf's wolf face I put 2 smaller-sized sound holes in the corners, clear of the label. The sizes of the holes were determined by the grommets I was able to find. Finding non-plastic grommets was a chore. I think I went to 10 different stores and came up empty handed. Eventually I found some louvered air vents and removed the slats from the middles, leaving just the outer rings. I won't pop them in until after it's been finished, because once they go in they won't come back out. 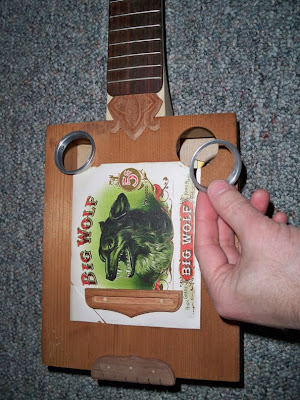 Basic construction of the Big Wolf is complete now. Next will be finishing and then making it electric. Stay tuned for more.
Posted by KW at 9:28 PM