I bought a kit online to electrify my guitar for cheap. It would have been even cheaper if I'd have located the items myself, but in the end laziness triumphed! This kit is pretty nifty though, and I'm glad I went that route. 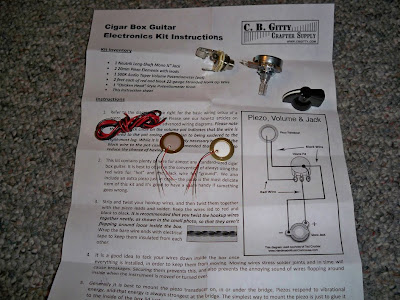 The pickup is just a cheap (so cheap they give you an extra) Piezo speaker, the same kind you'd find in Walkman headphones. By wiring it backwards it acts as a microphone instead of a speaker.
Before soldering I twisted the connections together and checked it in the amp. Everything worked fine on the 1st try. Yeeha! 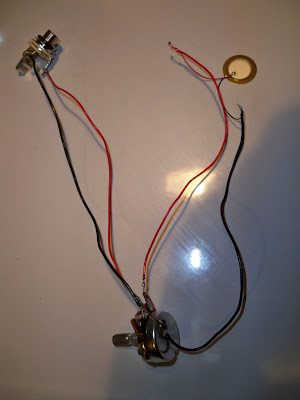 After feeling confident it was wired correctly I soldered all the joints. I learned something about solder. It's much easier to solder joints when you get the low-heat solder. It's only good for small electronics. In the past I was using some harder stuff and it took a while for it to melt. 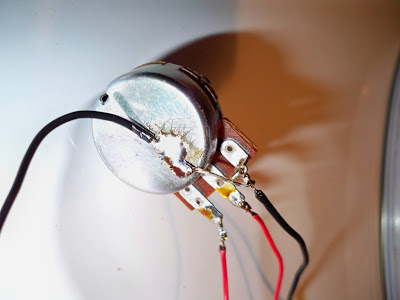 After soldering, I taped all the exposed joints with electrical tape, and then twisted the wires so they weren't going all over the place, rat's-nest style. 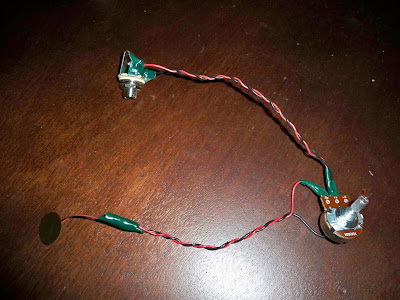 It was fairly simple to mount. The jack and the volume knob were tightened on with nuts, and the Piezo speaker was attached with duct tape. Thin strings are louder so it was mounted off-center toward the thick string side. 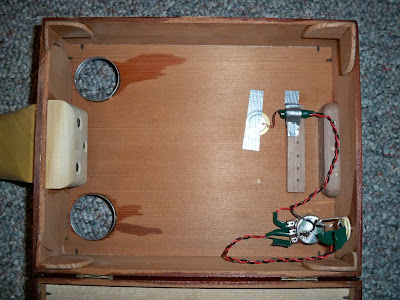 It's nice having the ability to open and close the lid. In addition to the obvious handiness when building it, it's also nice because I can store guitar picks in there, wedged under the screws in the corners so they don't rattle around.
All that's left if stringing it up! Woohoo!
Posted by KW at 4:24 PM