I had a bunch of Frankenstein stuff in boxes and Mei said she wanted to help me display it on shelves in a back room of our house. She chose the back room so when people came over they wouldn't think we were freaks. She did all the arranging one day when I was at work. When I came home she showed it all to me and it looked really nice. It's been in there for a while now, and I just now happened to notice this. 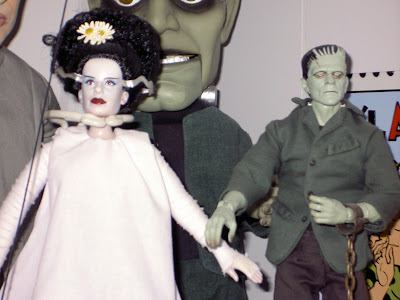 Notice how there's nothing in Frankenstein's hand? 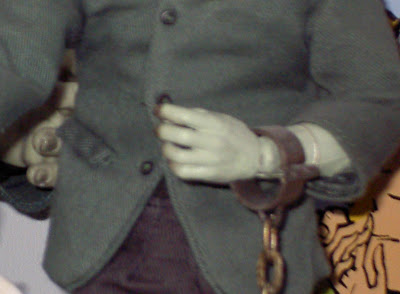 That's because it's in his bride's hair. Mei did that. Also the Bride has had her elongated Marge Simpson hairdo poofed out into a nice round afro. I guess Mei thought that was how it was supposed to be. Isn't that pretty? 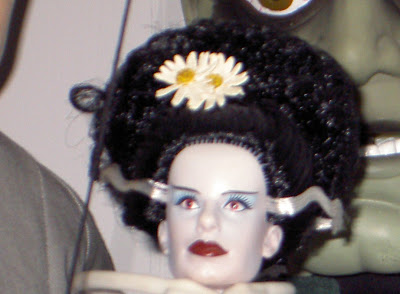 I guess most people know the thing with the flower and Frankenstein and the throwing of the girl in the water. Right? I assumed it was common knowledge. When Mei saw a flower I guess she figured it must go in that pretty lady's hair. Mei said she'd never heard of Frankenstein. It boggles my mind sometimes when something so popular over here is unheard of in other countries. She's also never heard of the Beatles. She said she did know who Elvis was, but she didn't know his name because they call him Wang Mao (King Cat) over there.
But maybe it's not culture-related. Maybe this could be due to Mei not being a guy. Maybe girls don't care about Frankenstein as much as guys regardless of what country they are from. I left the flower in the afro.
Posted by KW at 10:45 AM