The reason I am just now thinking about this is because I saw a kid in the shoe store the other day with this on his t-shirt. I remember this project became less and less fun as they asked for it to be less and less pointy. The 1st version had pointy teeth and claws and a mean face. Then they said they needed the teeth to be rounded because it was too mean for middle school. After I changed that they said the claws were too pointy so I had to dull them up. Then they said his expression was too evil so I teddy-beared his face up. 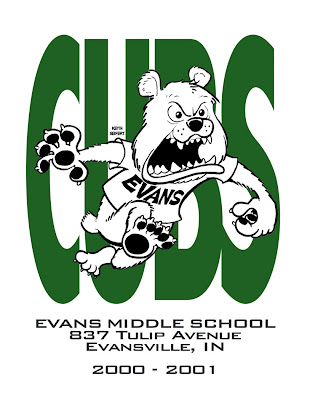 Even though they were only middle school kids why can't they have pointy teeth and claws? Will they get nightmares? I personally think a dull tooth would hurt much more than a sharp tooth. Sharp teeth will penetrate with less surface tension than dull teeth. A dull tooth may require 10 times the clamping pressure to finally puncture and tear the skin. Also razor-sharp cuts don't leave nasty scars.

For that matter, what's with the 20MPH zone in front of schools? If I drive over a kid at 20MPH it will only drag out the crunching pain and torture even longer. Why not go fast and get it over with? And there's also the possibility the kid could even be knocked clear of the car's tire path. See? (joking)
Posted by KW at 3:06 PM