This guy looks like he'd have snubbed me back in high school. 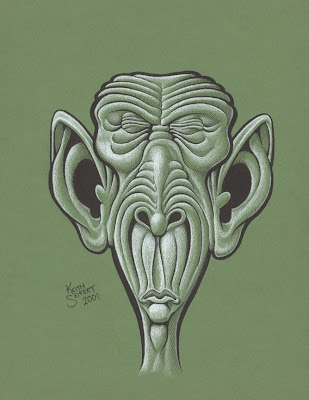 I remember back in high school there were some pretty snobby kids. There was a regular neighborhood where regular kids came from, and then there was this fancy area where all the doctors' and lawyers' kids lived. They kept to their group and we kept to ours.

Once, one of the snob girls crossed the forbidden barrier into my zone and was very suspiciously friendly all of the sudden. She and I had never talked in all the years we were in school together. In fact all the times before, she would literally sneer at me every time she looked at me. I suspected she wanted something. Eventually she asked me if I could draw some logo for some elite HS club where only the snobs were made to feel welcome. I told her I'd do it and asked when the deadline was. I remember from the very start I had no intention of doing it.

Daily, she would sweet-talk me and ask me if the logo was finished. I kept telling her "almost." She said all of the people in her club were waiting and excited about it. Then she'd sweet-talk a little more and go on about her way. It made me sick. Then the last day came, and the hour before it was due I got my friend Russell to draw something.

He didn't draw but was more than happy to help. It was supposed to be a bear, like our HS mascot doing some club-related thing. I told him to make buggy eye balls and a snake tongue. He made the tongue slithering out into a spiral, and also gave the bear pointy ears, and lightning bolts emitting from it's protruding eyeballs. Also the name of our school was Central, and he spelled it Cintrel.

The next hour came and the girl showed up and asked if the picture was ready and I handed her that masterpiece. She laughed at 1st and said, "No. Really. Where is the drawing?"

I said "If it was up your butt you'd know it!" and then my buddies cackled with laughter. She was one mad snob that day.

At the time it seemed like a just and right thing to do, but nowadays I kind of feel like a jerk for it.
Posted by KW at 12:17 PM