UNFINISHED PROJECT AND GENERAL ALL AROUND BAD EXPERIENCE

This is an unfinished job I more than likely will never finish at this point. I still needed to flesh out the 3 people standing on the phone, and I needed to add the title above the monster's head. 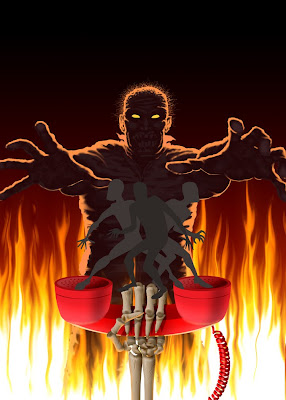 A couple years back a guy asked me to do a dvd box cover for his movie. I sent him a couple very rough ideas and and then we talked out a plan. I told him I'd do it for free for the exposure, and also he said I could do a camero appearance in his movie for fun. After I started working on this everything became mysterious. I didn't hear back from him for a year so I gave up on his project.

As luck would have it, I went to a monster movie convention and saw his booth with stacks of dvds on the table, and all the dvds had my crummy rough sketch on their covers. It was uncomfortable for both him and me. He was embarrassed for not telling me he went with the crappy version. I was uncomfortable and embarrassed that awful drawing was on all the dvds. He pointed at the dvd and said, "See? We put your name under your drawing!"
I looked and sure enough my name was under that bad drawing.
The cameo appearance thing never happened either. It was a big disappointment. Free exposure jobs are dumb and I'll never do one again. This job learnt me.

The topper-offer to this sour experience was when he gave me a free dvd, and signed it to me, and spelled my name "K-E-N." It was extra revolting because my actual name was 1 inch away from his signature, on that very dvd, under that terrible sketch, and he couldn't trouble himself to look that far away.
Posted by KW at 4:13 PM